No One, in Fact, Is Better Than Ezra 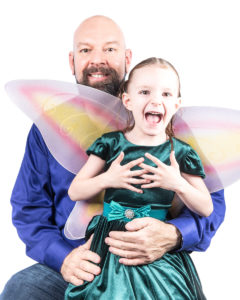 If you don’t know what Imposter Syndrome is, Ezra, a Coloradan father, can tell you all about it. Working through a divorce, going back to school to pursue a career change and dealing with health issues all made for an extremely difficult year for him. Going through all of this in the midst of a world-wide pandemic didn’t help and Ezra was also starting the process of sharing custody of his 5-year-old daughter in the middle of it all.

Though he constantly tried his best, Ezra said he often worried that he might not measure up to being a good father. Imposter Syndrome, where one doubts their skills or accomplishments and often feels like a fraud, was becoming all too real to him, that is until he found his Circle of Father’s group.

Ezra received a simple text message from Bright By Text, a FREE subscription-based text messaging service that offers resources to people parenting. The text was promoting a group of dads and male caregivers that were getting together online weekly to support each other and talk about whatever they want.

“I was a little uncertain before joining. I didn’t know what to expect. I didn’t know if I would fit in,” Ezra said reflecting on his reservations about attending the group. But those concerns became irrelevant after getting on that first call, adding that “there were no requirements. There were no expectations. It was just a bunch of guys on a call being welcoming…. If I had to sum it up in one emotion, it was relief.  I’d found a group of people I could confide in, ask for advice, and relax around.  Each of them had been in a similar place before, and all had something to add to the conversation.”

Through Circle of Fathers, Ezra has been able to open up to this group of guys, be real with them and get the support and encouragement that he was needing. The other guys in the group helped him see that what he was doing for his daughter was not only enough, but was often more than many parents were able to do for their children.  They helped Ezra to accept that he didn’t have to live up to the unrealistic expectations that he had set for himself. “I’d formed a picture of what a ‘father’ was from what I’d seen in movies and on television. I thought I had to be a ‘superdad’. It took me a while, but they helped me believe I actually did measure up,” said Ezra. It wasn’t about cooking the biggest breakfast every morning or having all the answers all the time. It was about being there for his daughter, supporting her needs and loving her the best that he could. “There are no judgements at Circle of Fathers. It is all about being there for each other,” Ezra said.

The truth is that life can be difficult at times and there are curves in the road we don’t expect. For these times, we all need support and acceptance. And sometimes just having someone there to listen is the most helpful thing you can find. And that’s what Circle of Fathers has been for Ezra. It’s a place he can go, judgement-free, and share what he’s going through. The guys are always there for him, offering support and giving advice when needed. But most importantly, they help him remember that he isn’t a fraud at all. He is, in fact, a good dad.